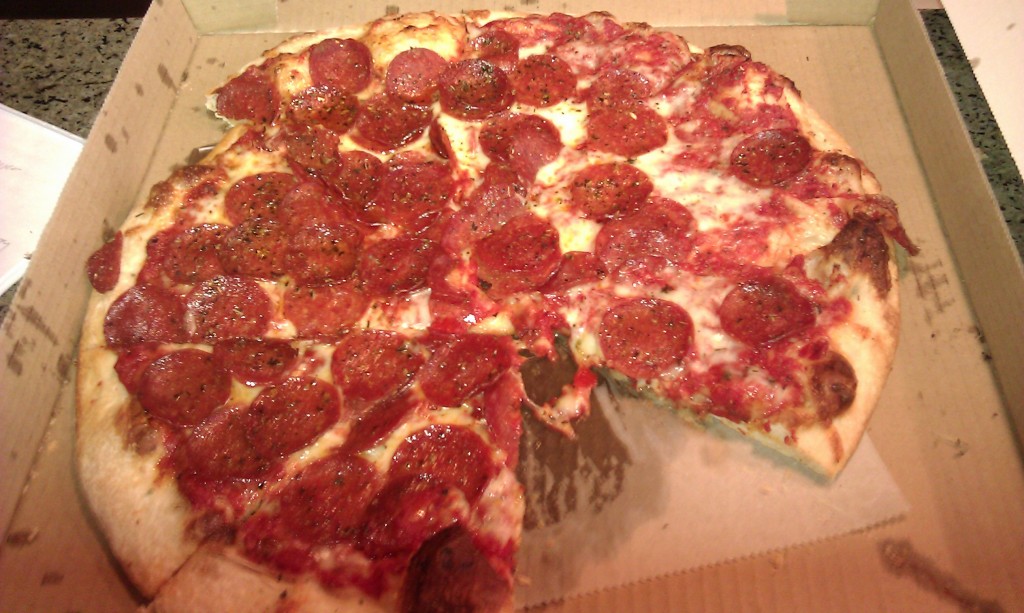 On Warren Way, just off Moana, you will find the only Nevada franchise of zPizza.  zPizza has grown into a large international chain by trumpeting its focus on organic ingredients including organic dough and sauce.  It also offers vegan pizzas (made with vegan cheese), gluten-free pizzas, and pizzas made with whole wheat flour.  All meat toppings are also MSG-free including its “pure pepperoni” which comes with no MSG, no preservatives, and no nitrates.    If Whole Foods were a pizzeria, it would be a lot like zPizza.

A 100% Organic Cheese Pizza from zPizza

The pizza is cooked in a conventional gas pizza oven.  It’s a thin crust pizza, but unlike a New York Style pizza which has a robust edge crust and gets progressively thinner as you get to the center of the pizza, zPizza has a small crust on the edge and actually gets a bit thicker as you approach the center.  Still pretty thin overall though.

The crust on my pizza, as you can see below, was reasonably thin, but lacked significant bubble structure.  This means it ends up being fairly dense without a lot of chewiness or crispness. 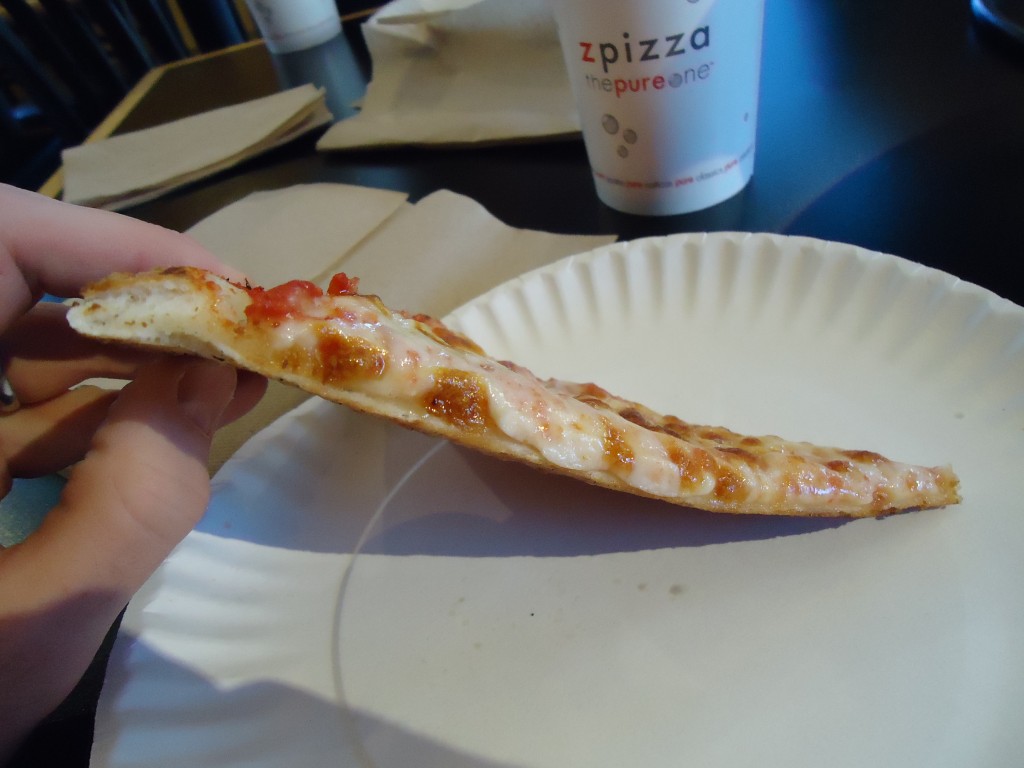 The edge is thinner than the center crust

As for the organic sauce and cheese, they put a healthy amount of sauce and cheese on the pizza, more than you would find on a Neapolitan pizza, but not as much as you might find on a heavy American style pizza, such as a Costco pizza.

Do the organic flour, sauce and other ingredients make a big difference?  From my perspective, I really couldn’t taste a significant difference, but I don’t think they are selling a distinct organic taste, so much as they are selling the piece of mind some folks get from knowing that they are eating organic foods.

The restaurant itself is situated just of Moana in a small strip mall on Warren Way.  As you walk in there’s a counter to order the pizza and then there’s a seating area that fits about 25 people in the back.  You order at the counter and they will bring your pizza out. 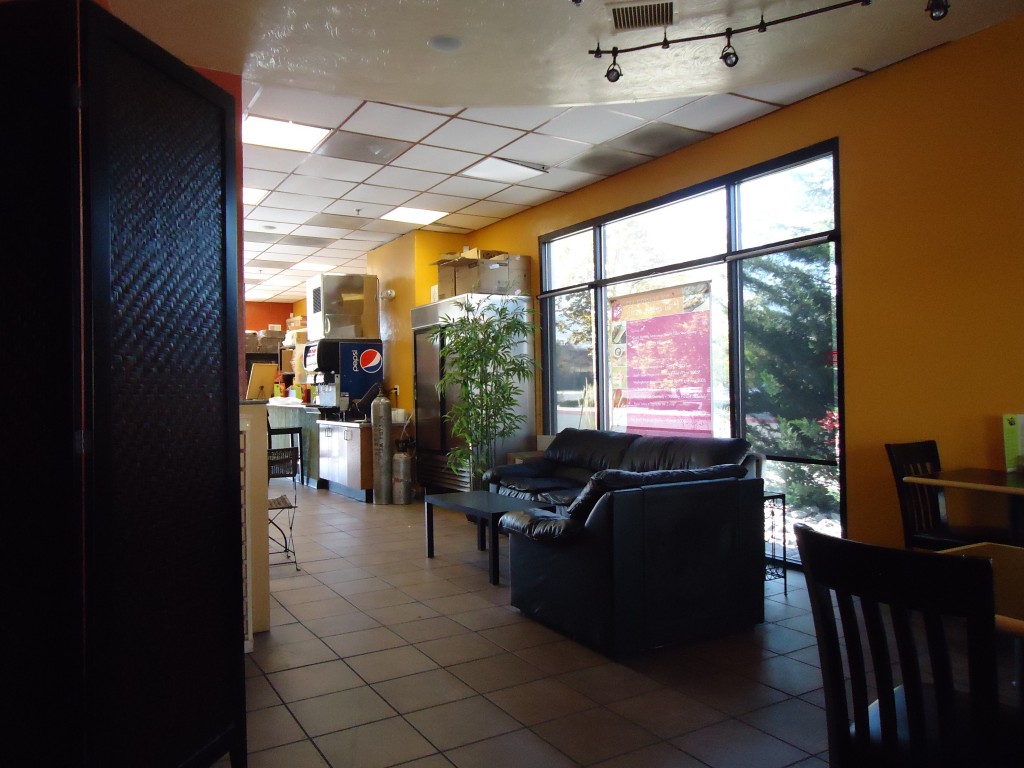 zPizza could use a fung schui consultant and a professional organizer

One thing that struck me as a bit odd is that there were racks of ingredients outside of the counter/cooking area.  It’s like their storage room wasn’t big enough so they just decided to put a lot of stuff out in the open. In addition, in the seating area there was a TV/Karaoke setup with lots of wires hanging out.  While the seating area itself was nice, in general the space had a bit of disheveled look to it. 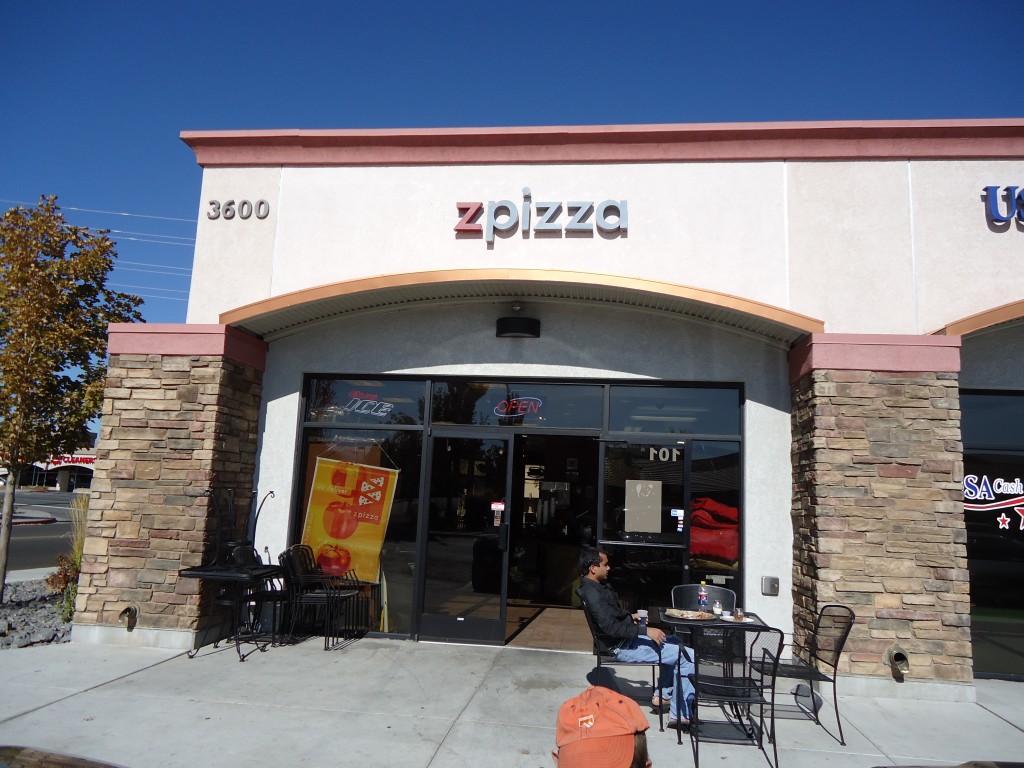 Organic goodness awaits you inside!

Overall, if organic and/or vegan pizza is very important to you, then you will definitely want to check out zPizza.  They clearly take this focus seriously and have made a significant effort to insure that all of their ingredients conform with their healthy, organic focus.   That said, the pizza itself is not terribly memorable.  As you might expect with a large chain, they’ve taken a distinct “middle of the road” approach and it shows.  It’s certainly not bad pizza, especially when compared to other large chains, but it’s not great pizza either.